The Habsburg Express is a captivating journey aboard the Golden Eagle Danube Express , from Vienna, capital of the Habsburg Empire, to the stunning and historic Croatian port of Dubrovnik.

Discover the fascinating and vibrant culture of the Balkan states and their neighboring countries on some of the most scenic railway lines in the world, as the Golden Eagle Danube Express weaves its way through verdant landscapes, across coastlines, and over mountain passes.

Read More
You’ll spend four relaxing days aboard the luxurious Golden Eagle Danube Express while taking in the sights and stories of this enthralling region, once home to the Habsburg Empire.

From Vienna, venture forth to another crossroads of many civilizations and cultures, Salzburg, and dip into Germany for a tour of the majestic Herrenchiemsee Palace, commissioned by the late 19th-century Bavarian King, Ludwig II.

Climb the Julian Alps to visit the incredibly picturesque Lake Bled in north-western Slovenia, with its island, church and castle, before visiting Rijeka, Croatian port city on the northern Adriatic, crowned the European Capital of Culture in 2020. Visit its Maritime Museum, housed in the former palace of the Austro-Hungarian Governor.

Journey into Bosnia & Herzegovina and learn the important history of the Balkan war with a stop in Sarajevo. Take a special visit to the Tunnel Museum under the Sarajevo airport for a truly absorbing tour guided by a survivor of the conflict.

Visit Mostar, one of the most important cities of the Ottoman Empire.  Walk across its iconic stone arch bridge, which serves as a connecting point for the Christian and Muslim sections of town.

Journey’s end will be the “Pearl of the Adriatic,” Dubrovnik.  Explore its rich history as one of the great cities of the Mediterranean as you wander its narrow streets overlooking the Dalmatian coast, and enjoy dinner at Nautika. 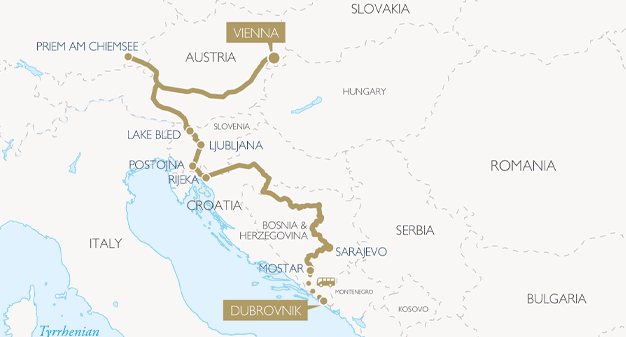 Arrive in Vienna and be transferred to a luxury hotel for a one-night stay. Enjoy a welcome reception dinner and a chance to meet fellow travelers and tour staff.

The stunning capital city of Austria enthralls visitors with its rich heritage. Vienna is a seductive metropolis of elaborate palaces, renowned coffee houses, classical music and enchanting opera. Today’s program will allow you to sample the lively Naschmarkt, home to over 100 food and antique stalls, the famous Schönbrunn Palace, or free time to explore yourself.

In the evening, board the Golden Eagle Danube Express. Settle into your private en-suite cabin before enjoying a welcome dinner on board as the journey begins through the Alps to Southern Bavaria.

In the morning, travel on the meter-gauge Chiemsee-bahn, one of the world’s last operating steam* tramways, dating back to 1887.  Depart from the station at Prien to the shore of Lake Chiemsee, crossing by boat to visit the Herrenchiemsee New Palace. The palace was commissioned in the late 19th century by Bavarian king, Ludwig II. Designed to echo Versailles and pay homage to Louis XIV, the palace is one of the most lavish royal buildings in Germany.

Following lunch, return over the border into Austria for an afternoon sightseeing in delightful Salzburg. Surrounded by beautiful mountains and divided by the flowing river Salzach, Salzburg is famous in the world of music as the birthplace of Wolfgang Amadeus Mozart and more recently as the setting for the film The Sound of Music. Enjoy dinner tonight in a local restaurant.

*Steam haulage is subject to availability.

Today, the train climbs through the Julian Alps to Lake Bled which, with its island, church and castle is an incredibly picturesque alpine lake situated at the foothills of the Alps in north-western Slovenia.

After lunch, make the short journey across to Ljubljana. Slovenia’s capital is a delightful city which blends a combination of ancient architecture and youthful culture. A short city tour includes visits to Preseren Square, Three Bridges, Dragon Bridge and Plecnik Market.

Continue to nearby Postojna Cave for exclusive evening entry via an underground train deep into the cave. Tour the network of magnificent halls, a myriad of cave formations and mysterious animals.

In the morning, arrive in the port of Rijeka, situated on Kvarner Bay in the northern Adriatic, for a short visit to the Maritime Museum. Return to the train for lunch we enjoy time on board the Golden Eagle Danube Express as it weaves across the beautiful Croatian countryside towards the border with Bosnia & Herzegovina.

Arrive into the Bosnian capital of Sarajevo, an intriguing blend of Eastern and Western culture; it has mosques and minarets, an ancient bazaar and an atmospheric old Turkish quarter. Discover the city’s poignant history through a truly absorbing tour detailing the horrors of the Balkan War. Sarajevo suffered from the longest siege of a capital city in the history of modern warfare. The scars of war are still evident as we travel past war-torn buildings and make a special visit to the Tunnel Museum under Sarajevo Airport. Your guide, who lived through the 1992-1996 conflict, brings to life in touching fashion the struggles the citizens of Sarajevo faced during the siege of the city.

After our final lunch on board the Golden Eagle Danube Express, arrive in the afternoon in the historic city of Mostar, a crossroads of many civilizations, cultures and three religions. Mostar was one of the most important cities of the Ottoman Empire. The town’s renowned stone arch bridge linking the Christian and Muslim areas was re-built in the summer of 2004. Visit the Turkish House and the mosque before walking through the narrow, bazaar streets, where you can shop for traditional souvenirs and handicrafts.

Enjoy an evening dinner in Mostar and spend a final night aboard.

Shortly after breakfast, disembark from the Golden Eagle Danube Express at the station of Capljina and make the bus journey (approx. 2hrs 30 mins) to Dubrovnik.

Since its foundation in the 13th century, Dubrovnik has been attacked many times but it is now restored as one of the great cities of the Mediterranean, essentially unchanged for 700 years. Tour the city traveling through Ploce Gate to visit the Franciscan Monastery with one of the world’s oldest pharmacies, the Old Harbour, St Laurence Fortress and the Rector’s Palace.

Overnight in a luxury hotel in Dubrovnik.

Following breakfast, transfer to the airport for onward departures.

Prices are per person.

As always, easy, efficient and professional.

…its riveting itineraries, fully inclusive pricing and comfort undoubtedly put it in the forefront of luxurious European railway travel.

Angela Walker, Vice President, Operations, The Society of International Railway Travelers®, following her May, 2015 journey on the Danube Express.

Eleanor was great to work with, and did everything for us. We were very happy with our trip.

Included in the tour price: