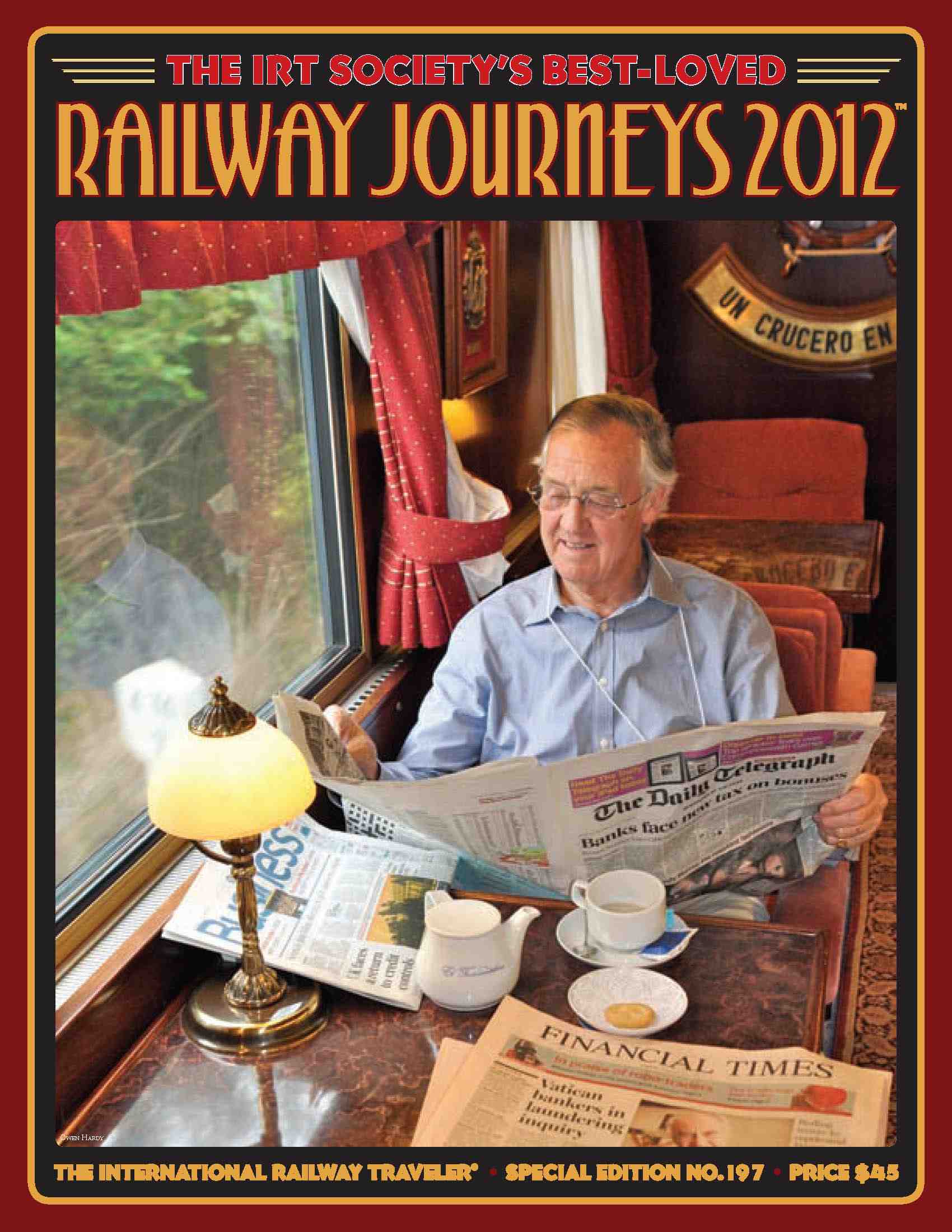 The Society of International Railway Travelers® is proud to announce its annual picks of the best of the best, and the trend towards true “five-star-hotel-on-wheels” status is unmistakable. Consider:

“The trend really does seem to be headed in the direction of ever greater luxury,” said Eleanor Hardy, president of The Society of International Railway Travelers®, which compiles the annual “Top 25 List” and has been evaluating the world’s great trains since 1983. “Congratulations to all the trains and their staffs for earning this well-deserved World’s Top 25 Trains medallion.” The award is based on frank reviews of owners, staff, editors and our travelers.

Read them in our publication, available for immediate download here.

“My associate Angela Walker (the Society’s Vice-President, Operations) just returned from northern Spain, where she was highly impressed by the El Transcantábrico Gran Lujo, the new narrow-gauge luxury service running between Santiago and San Sebastien. Her suite occupied half a railroad car!”

These developments follow on the heels of last year’s introduction of the Maharajas’ Express in India. Its Presidential Suite, which occupies an entire train car, makes it the largest train accommodation in the world. Spend a mere $22,000 per person, and you too can enjoy two bedrooms, two bathrooms (the master includes a bathtub), and a large parlor with couch, table, chairs and desk.

India, in fact, leads the world with the greatest number of “Top 25 Trains,” totaling four. Besides the Maharajas’ Express, they include Rajasthan’s Palace on Wheels, the Delhi-Mumbai Deccan Odyssey and the tiny (and decidedly non-luxurious) Toy Train, which runs (occasionally) high into the foothills of the Himalayas to Darjeeling.

Another leader in the luxury train realm is the Orient-Express company, which is responsible for no less than six of the IRT Society’s “World’s Top 25 Trains” — five of them definitely luxurious:

N. America has just one appearance on the “World’s Top 25” list, but it’s a stunner: the Royal Canadian Pacific, based in Calgary and operating on a very limited basis—just three trips in 2012.

Last but far from luxurious least is South Africa’s Pride of Africa, run by Rovos Rail, which offers probably the world’s most incredible luxury-rail experiences. Operating all over S. Africa as well as, occasionally, to Namibia, Botswana, Zambia, Zimbabwe and Tanzania, the train overcomes inhospitable climate, lack of infrastructure and a maze of red tape to offer an almost seamless product. Once you’ve ridden with Rovos Rail (which, with 25 IRT Society members, Eleanor and I did last July from Cape Town to Dar es Salaam) you won’t want to see Africa any other way.

The emphasis on luxury in no way denigrates the others on the “Top 25” list. The Budapest-Istanbul Danube Express, Switzerland’s Glacier and Bernina Expresses and Norway’s tiny Flåm Railway all are not-to-miss European railroad experiences.

China’s Shangri-La Express can’t be called a luxury train. But it sure beats riding a regular Chinese train and likely will continue to do so until the much-vaunted Chinese Tangula Express luxury trains begin running (if ever).

Over in the Western Hemisphere, Peru’s Andean Explorer offers an unforgettable all-day ride, along the top of the world, from Cusco to Lake Titicaca; farther north, Canada’s Rocky Mountaineer offers a great, all-daylight ride (our advise: splurge for a spot in the GoldLeaf dome).

Half a world away, finally, great railway experiences can be had in Australia, the only continent that can boast two trans-continental trains: the Sydney-Perth Indian Pacific and the Adelaide-Alice Springs-Darwin Ghan. Platinum Service, introduced several years ago, makes the going even better.

So there you have it: the World’s Top 25 Trains for 2012. Again, to download our publication now, click here.

What’s that you say? You have a differing opinion? Please tell us. What are your “Top 25?” Now’s the time to join the conversation!