“Who’s this?” I asked, spying a little dog lying patiently in a dark corner of the bar car.

But in the short time I’d been aboard the Cruise Train Seven Stars in Kyushu, I’d already learned an important lesson: look for details.

In other parts of the train, I found more subtle “jokes”: tree frogs climbing a wall, wasps tending their nest, a simple white button nestled in a rich, gold picture frame.

And almost everywhere I turned, I saw stunning fabrics, gorgeous glasswork, richly hued posters, shimmering porcelain. Most spectacular of all was the intricate floor-to-ceiling woodwork from a variety of trees of varying colors.

In sum, even my short, two-day ride on the Seven Stars yielded a plethora of extraordinary experiences — visual, culinary, musical — even spiritual, if you believe the train’s tagline: “a journey to discover a new way of life.”

Seven Stars, a special sightseeing train of Japan’s JR Kyushu, began life two years ago, and it’s never looked back. Despite its steep price, not even all the Japanese who want to ride can get tickets, much less the hapless foreigners clamoring for a ride.

That’s why The Society of International Railway Travelers® chartered the entire train for a four-day, three-night itinerary as part of our luxury Seven Stars Over Japan tour, which runs Nov. 5-19, 2016.

I recently returned from a quick visit to Kyushu – Japan’s southernmost island – to enjoy a rare, non-revenue ride offered by JR Kyushu to a small group of journalists.

Granted, two days and a night were not nearly enough time to take in all this train has to offer. But it was long enough for me to declare without hesitation: the Seven Stars elevates the standards of world luxury train travel to an even higher level.

One regular suite is handicapped-accessible. The train also carries a wheelchair.

At the other end of the train, the seventh car contains two “deluxe suites”  which can accommodate two or three guests each.

Deluxe Suite A is 226 square feet and boasts a private glass picture window at the end of the car. It is by far the most popular accommodation on the train, JR Kyushu says.

The other deluxe suite is beautifully appointed but, at 183 square feet, is slightly smaller.

Everything on the train was specifically designed for the Seven Stars, save one element (I won’t spoil your experience by naming it; see if you can guess.).

This surfeit of over-the-top design elements is matched by an expert staff, who know how to combine Asian elegance and hospitality with genuine warmth.

When I misplaced my iPhone charger, for example, Mr. Yoshiharu Aritou,
the train manager, insisted on giving me one of his (For the record, I’m sending it back to him, along with a heartfelt note and bottle of Woodford Reserve bourbon.).

Moreover, the Seven Stars staff is bilingual and couldn’t be friendlier. Menus and signs are in English and Japanese. (Our November tour, of course, will be conducted in English.)

Also near perfect is the Seven Stars kitchen, which turns out delicacies as beautiful as they are tasty. I enjoyed three meals on the train: two lunches and a dinner, all of them set menus.

Kyushu is known for its variety of seafood, vegetables and fruits, and I was happy to let the Seven Stars chefs choose for me.

Here are just a few of the offerings from our “Heartfelt bento lunch from Bungo, Oita Prefecture:

“Red sea bream cured with Ryuhi Kombu…Egg tofu with wakame seaweed, Assortment of separately prepared vegetables, Food of the season [in my case, autumn] cooked in paper made with kozo tree fiber…”

The spirits from the Blue Moon bar were equally inspired. I made a point of ordering a Blue Moon cocktail, whose contents included Japanese shochu, a liquor made from sweet potatoes.

It was mixed with some of the tastiest juice – was it grapefruit or tomato? – I’ve ever had. 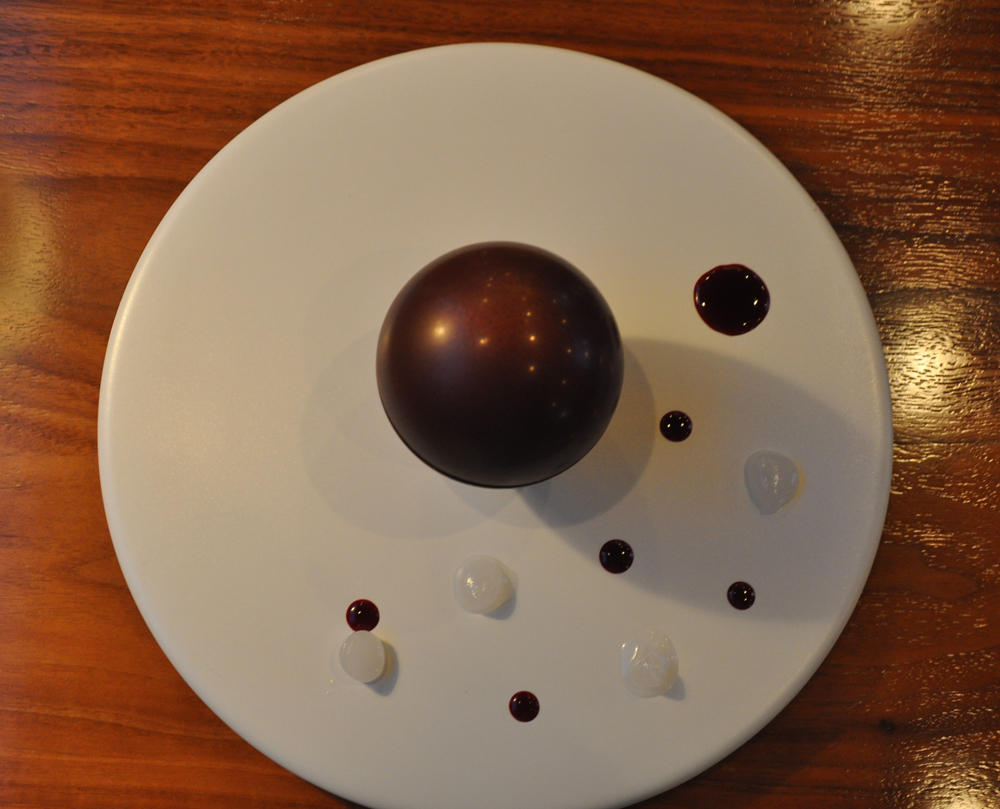 One of my favorite menu items was actually French-inspired: a chocolate sphere served at tea time. The thin, edible outer shell revealed a rich, creamy center: decadent and delicious.

(For the true dessert-lover, try JR Kyushu’s new Sweet Train, which I also sampled on my visit. More about that in another Track 25 post.)