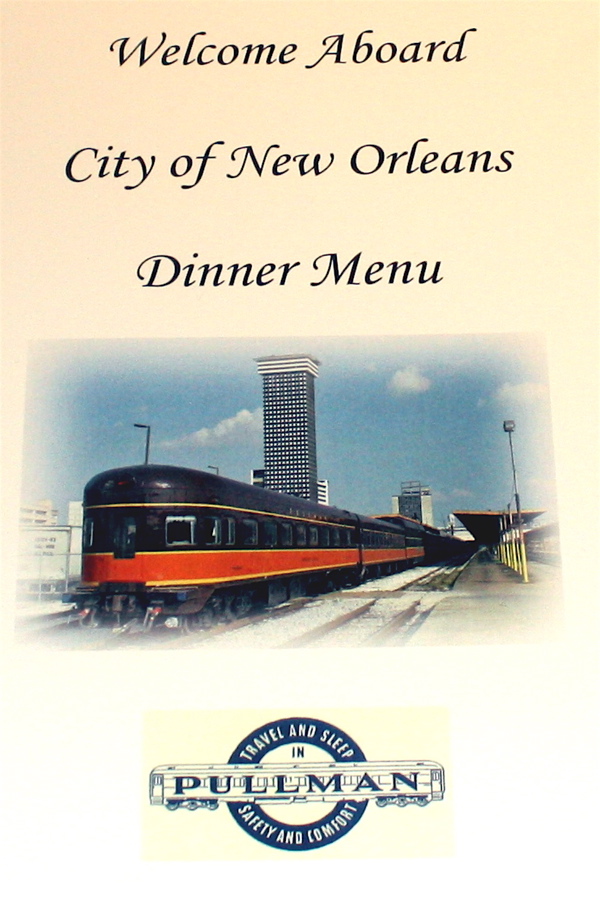 Revise the Pullman name? Bring back Pullman’s first-class service? With up-to-date Pullman cars based in Chicago?

Even if the magician behind all this was Ed Ellis, I was skeptical. Many people had tried such schemes before and failed.

Ellis is the visionary leader of Iowa Pacific Holdings (IPH). Formed in 2001, IPH is involved in a growing number of main- and short-line freight and passenger rail ventures throughout North America and elsewhere.

Iowa Pacific Holdings prides itself on its expert operation of successful, for-profit, rail-related services. And it doesn’t shy away from running passenger trains. In all, IPH controls 10 passenger rail operations in the U.S., Peru and the United Kingdom. A year ago in April, IPH took the plunge with its Pullman Sleeper Car Company, LLC (PSCC).

First, Ellis grew up in Paducah, KY, near the Illinois Central mainline connecting Chicago and New Orleans, and he’s partial to it. Second, and more practically, Amtrak’s daily train to Louisiana, the City of New Orleans, has the capacity to haul extra cars, and New Orleans terminal has space for extra cars as well.

One day in late April, I stepped off Amtrak’s California Zephyr in Chicago, ready to try out Ellis’ revived Pullman service. Union Station was extremely busy, and neither Red Caps nor harried Amtrak information agents could help me find the Pullman lounge. Finally, an Amtrak police officer directed me to the Pullman Rail Journeys booth in Amtrak’s First-Class Metropolitan Lounge.

My train consisted of two cars. One was sleeper Chebanse, an 8-roomette/6-bedroom sleeper formerly owned by Florida East Coast Railway. The more important car was at the tail end: heavyweight round-end observation/lounge/sleeper Pontchartrain Club, built in 1917 for the Illinois Central Railroad. Both cars were smartly painted in classic IC colors. I was even more pleased when lead porter Paul Carter directed me to bedroom C on Pontchartrain Club.

Ellis and IPH say they want to recreate the “Pullman Experience” of attention to detail, comfort and style. And walking to the observation area of Pontchartrain Club, I couldn’t help noticing the difference from Amtrak’s standard stainless steel and ubiquitous plastic décor.

I quickly settled into a plush easy chair near the round end. Almost immediately, waiter Jeremy Kniola offered me a glass of crispy Santa Margherita Pinot Grigio. I relaxed in my armchair as I watched the City’s backup move out of Union Station.

Soon we were heading south on the former Illinois Central mainline. Waiter Kniola called us to dinner, and we took our places around the well-appointed Pontchartrain Club table. Only six passengers — the entire passenger load that day — joined me. (Pullman Rail Journeys says it’s still in its “shake-down” phase. While it doesn’t turn away paying passengers, it’s focusing on getting the word out to the travel industry.)

Dinner was my trip’s highlight. Executive Chef Dan Traynor spent close to a year studying Pullman’s high-quality menus, service and recipes. Moreover, in a previous life, Chef Traynor worked aboard the dome cars of the Holland America cruise line in Alaska. He understood the art of cooking in minuscule spaces.

Chef Traynor caters to many taste palates, as our menus confirmed. A relish tray preceded the salad course. Then we enjoyed a selection of four main courses including grilled seasonal vegetables for the non-carnivores among us. An off-train commissary prepared most of the dishes, which were then finished on board.

I polished off my dessert of frozen chocolate mousse with raspberries, as we rolled over former Illinois Central track through Kankakee and Rantoul, Ill. The roadbed was glass smooth.

While the train was stopped at Champaign-Urbana, I made my way to my bedroom. During my pre-bed ablutions, I concluded that Pullman Rail Journeys would be a much-heralded success if the evening and dinner’s quality could be replicated on every trip. 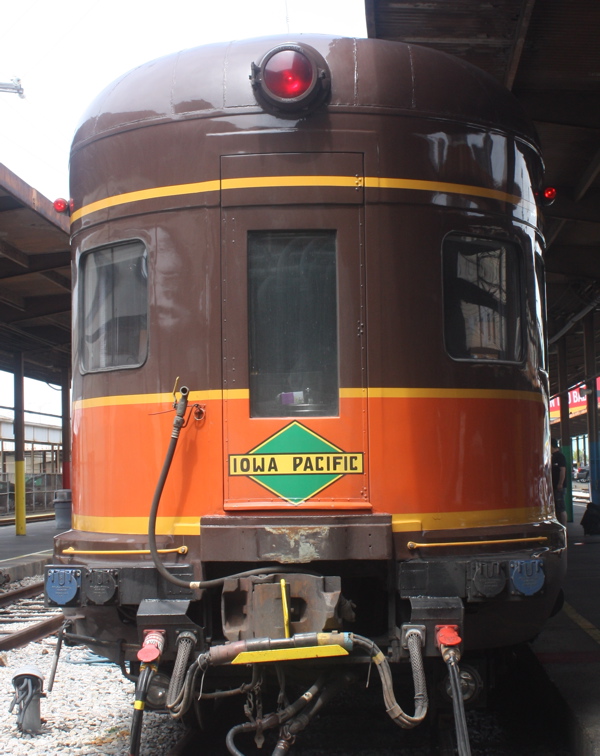 The long, early-morning station stop at Memphis aroused me from my slumber. But I couldn’t leave the train to stretch my legs, as the Pullman cars extended beyond the end of the Memphis platform! No matter. The 400-mile-ride from Champaign-Urbana to Memphis had been comfortable; I hadn’t detected any unnecessary movement in the old car. I was thoroughly enjoying myself.

I showered, dressed and headed to the lounge end of Pontchartrain Club. Though no newspaper was available, I took advantage of the fine onboard Wi-Fi service to check on life beyond the rails before taking my seat for breakfast. 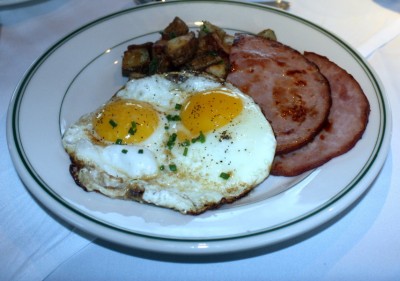 The meal was tasty, with freshly prepared fried eggs served with ham, fresh fruit and a glass of grapefruit juice, all accompanied with freshly brewed Bridgeport Coffee. But the meal proved to be an “adventure.”

The 126-mile, single-track mainline south of Memphis to Greenwood, Miss. is in poor shape. Waiters had trouble pouring liquids. Keeping plates on the table was a challenge. Looking out Pontchartrain Club’s big windows, I noticed many railroad work crews: a hopeful sign. (In fact, the track’s current owner, Canadian National, recently said it plans to bring the tracks back to Class 1 standards.)

I retired to my room for an early-morning nap. Later, I returned to the lounge to watch the languid, verdant Mississippi countryside roll by outside the large windows.

Lunch was announced a few minutes after the Hazlehurst, Miss. stop. Once again, we found ourselves around the large table for another fine meal. My main course was excellent: capellini Pomodoro — angel hair pasta with a tomato cream sauce, tossed with roasted cherry tomatoes, fresh basil and mozzarella.

Shortly after our stop at quaint Hammond, La., we came to the scenic highlight of the trip: the dash across 630-square-mile Lake Pontchartrain. For 45 minutes, The City of New Orleans was an ocean-going vessel, leaving parallel highways out of sight.

We crossed numerous bridges and viaducts, allowing us glimpses of Louisiana’s wild wetlands. Somewhere out there in the mangrove swamps near the tracks, Conductor Moore told us, were snapping turtles and alligators sunning themselves on downed trees.

All too soon — 30 minutes early, in fact — we backed into New Orleans Union Passenger Terminal. Leaving the station, I made my way to the new Loyola Avenue streetcar stop just outside the station. Looking back, I wished Ed Ellis and his dedicated colleagues well. It had been an excellent trip.

This service deserves to succeed.

Prices for the Pullman Rail Journeys accommodations range from $500 for a single, upper berth in a sectional sleeper (with curtains; bathroom and shower down the hall) to $2,850 for two sharing a Master Bedroom, which includes en suite shower, sink and toilet. The private service is attached to the rear of Amtrak’s daily City of New Orleans. The train departs Chicago at 8 p.m., arriving the next day in New Orleans at 3:32 p.m.; it departs New Orleans at 1:45 p.m., arriving in Chicago the next day at 9 a.m.

For more information or to book, call IRT.  The Society can book this for you as an independent one-night trip or as part of a multi-leg rail package.

For over 30 years, IRT International Editor Zane Katsikis has traveled the world by passenger train. In addition to writing about his rail travels, he works in the food and wine industry. We are delighted to welcome Zane’s great reporting and photographs to Track 25!