Vacations during the holiday season often conjure up images of someplace warm, perhaps celebrating some foreign country’s unique New Year’s traditions. My traditional New Year’s trip is on VIA Rail’s Canadian across Canada, often paired with my other passion: NHL Hockey.  I collect hockey arenas the same as I do rail mileage and train journeys. This time, my trip took me to Winnipeg to see a New Year’s Eve game.

It was also my 50th trip on the Canadian since 1977.
What I rode is not the much ballyhooed — and delayed — luxury service which will include completely revamped cars with dedicated attendants, larger accommodations with showers and flat screen TV’s. While waiting for that to materialize, now tentatively scheduled for 2013, the existing train has received a complete makeover. Although rooms remain the traditional Pullman size, where else except in a private railroad car can one ride a train straight out of the 1950’s?

It has been argued that today’s train isn’t the “real” Canadian, since it now mostly follows the more northerly Canadian National routing. But my consist, with the exception of one ex-Amtrak re-built coach (Amtrak, are you listening?), was made up entirely of original Canadian Pacific equipment.  All interiors have been updated with new carpeting, wall coverings, seat fabrics and lighting.

The diner, previously pretty in pink, is now brightened with white walls and ceiling with dark grey seats. The famous original etched-glass partitions have been retained. Food is of the expected high standard and service is provided in a professional manner. 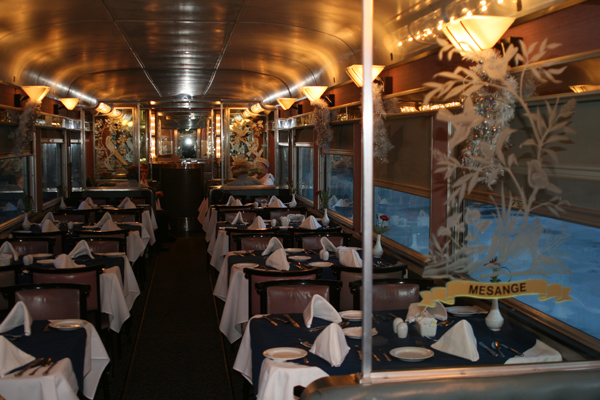 The Park Car has been darkened with dark grey ceiling and frames around the dome windows, giving a warm appearance, which draws more attention to the view outside rather than in. And if you get tired of the northern Ontario scenery, movies can be screened on a new flat screen TV in the lounge beneath the dome.

While accommodations are the traditional Pullman size, the Cabin for One (ex-Roomette) and Cabin for Two (ex-Bedroom) provide a cozy atmosphere in which to sleep. Unlike Amtrak, all rooms have en-suite toilet and sink; however, the shower is down the hall. Sections or “berths” also are available, the only train left in North American where they can be found. (Sections were made famous in the “naughty” sleeper scene by Marilyn Monroe, Tony Curtis and Jack Lemmon in “Some Like It Hot.”) While sleeping accommodations on the Canadian are generally priced higher than Amtrak, fares in winter are about half those in effect during peak summer season.

Some may question traveling in winter through the “Great White North.” But I enjoy the lower passenger counts, and there’s plenty of heat. Besides, what could be better than sitting in a front dome seat at night, watching the signals change from green to red as the train passes by, the moon illuminating the snow-covered ground?

The schedule is heavily padded, so arrival is likely to be on time, as it was for me in both directions. But I wouldn’t advise booking a same-day flight at trip’s end, at least not in winter.

While not the Orient Express, the Canadian is in my opinion the best we have going in North America.

Editor’s Note:  When the new luxury service debuts, the equipment and service as described above will still be available on each departure at traditional pricing, according to VIA.  The Canadian runs three times weekly in each direction between Toronto and Vancouver. The Canadian is one of The Society of International Railway Traveler’s World’s Top 25 Trains for 2012; The IRT Society’s 13-day “Trans-Canada Rail Adventure” includes three overnights on the Canadian.