Carefully designed to take in the best of Southern India, the Madras Mail covers everything from India’s most important cities to spectacular World Heritage Sites and stunning coastlines — all from the comfort of the luxurious Deccan Odyssey. The gateways of Mumbai (Bombay) and Chennai (Madras) are key ports of call, as they open the door to a more tropical India: slower, tranquil, and even more exotic.

When you’re not on the Deccan Odyssey, spend nights at some of the most exclusive 5-star hotels in India: Taj Mahal Palace, Mumbai,  Taj Fisherman’s Cove Resort and Spa Chennai, and Taj Falaknuma Palace in Hyderabad. 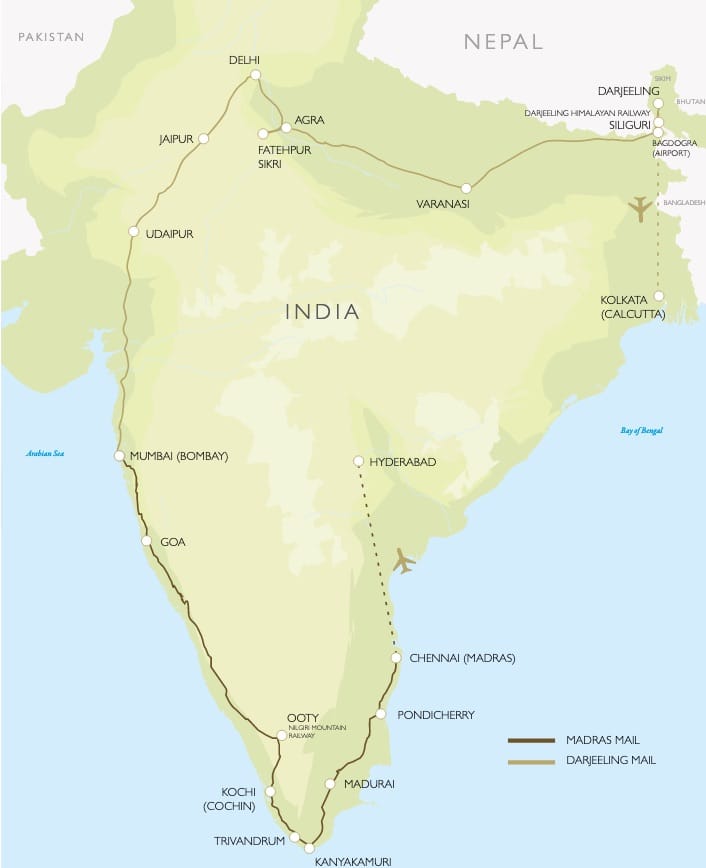 Your voyage of discovery begins at Mumbai airport, where you will be met and transferred to the iconic five-star Taj Mahal Palace & Tower Hotel for a luxurious two-night stay.

This flagship Taj hotel offers splendid views of the Arabian Sea and Gateway of India, alongside refined century-old hospitality. This legendary luxury hotel has played host to kings, dignitaries and eminent personalities from across the globe. Deluxe Class guests will stay in the contemporary Tower Wing, Presidential Suite guests reside in the Palace Wing.

All meals today are at your own arrangements.

This morning we take a short cruise, weather permitting, to Elephanta Island, a lush island densely wooded with palm, mango, and tamarind trees. This fascinating UNESCO World Heritage site cave complex dates back to the 3rd – 5th century and was designed to honor the life of Lord Shiva, one of the most auspicious Hindu gods.

We return to Mumbai for lunch at the famous seafood Trishna restaurant (or similar). In the afternoon, you are free to explore Mumbai independently or visit one of the colorful local markets.

In the evening, a welcome reception is followed by dinner at our hotel, where you can get to know your fellow travelers and toast to the journey ahead.

The compelling city of Mumbai is rich in culture and history. Today we visit the ‘Dhobi Ghats’, an intriguing outdoor laundry facility. Our tour then takes in Fort Bombay and Gandhi’s House, now converted into a museum depicting his life. Lunch is served in a local restaurant.

This afternoon, board the private Deccan Odyssey train. Settle into your beautiful, private en-suite cabin and enjoy the hospitable atmosphere of the stylish Bar and Lounge cars before experiencing a fine dinner of Indian or western cuisine in one of the restaurant cars.

Goa, renowned for its beaches, temples, and world heritage architecture, was the capital of the Portuguese Empire in the east and displays much of this heritage in its architecture today. We take a morning tour to view Basilica De Bom Jesus and Sé Cathedral of Santa Catarina, a towering white structure with a grand baroque interior and the most imposing church in Old Goa.

The Nilgiri Mountain Railway, a World Heritage Site, starts from the town of Mettupalayam and takes us on a journey full of twists and turns as this narrow-gauge steam train ascends 19 miles (about 30 km) on India’s only Rack and Pinion Railway to the town of Coonor, with gradients as steep as 1:12. From there, for the final 10 miles (16 km), the train picks up speed on its way to the hill resort at Ooty at 7,228 feet (2,225 meters), famous for its pretty cottages and beautiful Botanical Gardens. The steam-hauled ‘Toy Train’ heads through tea and coffee plantations, forest-clad hills, and 16 tunnels and tall bridges, making the journey to Ooty an extraordinary experience!

Cochin’s (also known as Kochi) beautiful, natural harbor and scenic backwaters have witnessed a rich and varied history; the British, Arabs, Portuguese, Dutch, and Chinese have all left indelible marks on the architectural development of this city. We will visit the Dutch Palace and the Jewish Synagogue and then see the Giant Chinese fishing nets that billow from massive teak and bamboo poles, which dot the entrance to the harbor and are still in use today. The day ends with a visit to the 500-year old Fort Cochin, where we will walk through the historical Dutch and Portuguese buildings. In the evening, there is the opportunity to witness a Kathakali Dance performance, where the dancers are elaborately made up with paint and masks, accompanied by drummers and musicians as they act out a dance drama.

The Deccan Odyssey arrives in Trivandrum in the early morning. After breakfast, we visit the Napier Museum and the dominating Padmanabhaswamy Hindu Temple. Following lunch, we head to Kanyakumari, which is mainland India’s southernmost point, where the three seas – the Indian Ocean, Arabian Sea, and Bay of Bengal – meet, and where the shore temple to the Virgin Goddess Kanyakumari stands.

Situated on the River Vaigai, the Temple City of Madurai is one of the oldest cities in India. It was the capital of the Pandya Kingdom. During the reign of the Nayaks, the magnificent Meenakshi-Sundareswarar Temple was constructed, which is one of India’s greatest cultural and architectural landmarks. In the evening, we will return to the temple to witness a Hindu ritual, an Aarti Ceremony, before we continue our journey towards Madras.

Pondicherry, located on the Bay of Bengal, is the former capital of the French territories in India. To this day, there still remains a rich French cultural heritage, including the French language being widely spoken. Landmarks include Raj Nivas, the residence of the Lt. Governor of Pondicherry – a handsome, 200-year old building that faces Government Park with its paths, lawns, fountains, and sculptures, as well as the wide and vibrant beaches and beautiful promenades. Tonight, we have our final dinner aboard the Deccan Odyssey.

Chennai (formerly Madras), the capital of Tamil Nadu, is located on the legendary Coromandel Coast and has a marvelous tradition of music and dance. This city of 4 million people has a pronounced colonial heritage dating back to the 17th century when the British East India Company built a small fort on the banks of the Cooum River and called it Fort St. George.

We arrive in Chennai in the morning and tour the highlights of the city including Fort St. George and the National Art Gallery. We also make a visit to the 16th century San Thome Basilica, built over the tomb of Thomas Didymus, one of the Twelve Apostles of Jesus. He is informally referred to as ‘Doubting Thomas’ because he doubted Jesus’ resurrection when first told.

This evening transfer to our luxurious beachfront property of the Taj Fisherman’s Cove Resort & Spa for a three-night stay. The Fisherman’s Cove, once an impressive Dutch Fort, is now one of the finest beach resorts in Southern India. It is located on a beautiful white sandy beach, lapped by the waters from the Bay of Bengal and offers a perfect setting for relaxation at the end of your journey through Southern India.

Today there is the option to visit Mahabalipuram, a beautiful coastal resort classified as a UNESCO World Heritage Site. The rock cut temples and caves situated here are amongst the finest in the world and originated between 7th and 9th century. The highlight is a visit to the Shore Temple, which is renowned for its intricate carvings and skilled craftsmanship and is one of the oldest temples in southern India.

Today is at your leisure in Chennai. Enjoy time relaxing in the lush landscaped gardens of the hotel or take one of the many scenic walkways that lead to the sea. Perhaps make time also to rejuvenate yourself with a signature spa treatment from the hotel’s excellent Jiva Spa.

Today we travel by air from Chennai to our final destination, Hyderabad, and stay for two nights at the luxury Taj Falaknuma Palace. Elevated 2,000 feet above Hyderabad, this 5-star property features a blend of colonial and Indian designs. It houses a heritage walk with beautifully crafted objects and a first-rate spa.

Built in 1894, it is the former palace of the Nizam, rumored to be the richest man in the world at one time. Overlooking the twinkling City of Pearls, this enchanting palace exudes romance and grandeur that take one back to when the Nizam ruled Hyderabad.

Today we visit Golconda Fort (Shepherd’s Hill), which was the capital of ancient Kingdom of Golkonda and is situated about seven miles west of Hyderabad. The city was founded in the 12th century by Kakatiya kings and the massive fort was later built under the reign of the Qutub Shahi Dynasty (c.1518–1687). The fort is a superb example of outstanding engineering and amazing architecture. Its system of acoustics is a big attraction–the sound of clapping at the entrance can be heard at ‘Bala Hissar’–1the highest point and over 3,000 feet away.

From here we travel to the Qutub Shahi Tombs. Located north of the Golconda Fort, the tombs represent the most authentic and majestic display of the Qutub Shahi dynasty’s architectural tradition.

We return to the city and visit Charminar. Sultan Muhammad Quli Qutb Shah, the fifth ruler of the Qutb Shahi dynasty, built Charminar in 1591 AD, shortly after he had shifted his capital from Golkonda to what is now known as Hyderabad. He built this famous structure to commemorate the elimination of a plague epidemic from this city. He is said to have prayed for the end of a plague that was ravaging his city and vowed to build a masjid (mosque) at the very place where he was praying.

In the evening we say our goodbyes to our fellow passengers at a Gala Farewell Dinner in the most magnificent of venues, the 101 Dining Hall of the Taj Falaknuma Palace.

After breakfast, you will be transferred to the airport to begin your journey home. Airport transfers are included for all guests.

All prices are per person.

In a word, wonderful. I am so happy. I have traveled my entire life, but aging has put limits on my mobility. I was beginning to despair--would I be able to make more of my dreams come true? With the help of Rachel Hardy, the IRT team, and their associates at Remote Lands, I was able to see everything I had hoped for--and more--in comfort. Amazing! I am so grateful.

Excellent! They took care of every detail and made sure we didn’t had any inconvenience at any time. Their hard work and personal attention to every detail was obvious. In a complicated country like India, they made sure we had the maximum enjoyment in every place we visited. Their professionalism and hard work assured it was an unforgettable experience.

Medical/evacuation insurance is required for this journey.  We recommend full tour cancellation/interruption insurance to protect your travel investment.

An Indian visa is required for U.S. citizens.

This intriguing rail journey through China ends in one of the world’s most fascinating and remote places: Lhasa, the mystical capital city of Tibet. En route, experience the Tangula Pass, which at 16,640 ft (5,072 m) is the world’s highest railway.

This epic 15-day journey is one of the best ways to travel through northern India. Experience the breathtaking views of the Himalayas from the hill plantations, explore the vibrant bazaars of Delhi, watch the sunrise on the sacred Ganges at Varanasi, and visit the amazing sights of Agra, including, of course, the incomparable Taj Mahal.