Castles of Transylvania: Istanbul to Budapest

Absorb the vibrant cultures, ancient castles, and spectacular scenery on this 7-day “Castles of Transylvania” journey aboard the Golden Eagle Danube Express.

Delve into the history surrounding Romania’s most infamous historical figure, Vlad the Impaler – or as he is more commonly known, Count Dracula – on this 7-day rail cruise of Transylvania.

Enjoy a walking tour of the beautifully preserved town of Sighisoara where the Count was born, discover Sibiu’s Evangelic Cathedral where Vlad’s son was buried after his assassination, and visit impressive Bran Castle — the residence of the vampire count, and the setting made famous by Bram Stoker’s novel.

This journey can be combined with the Balkan Explorer tour or Central European Classics tour. 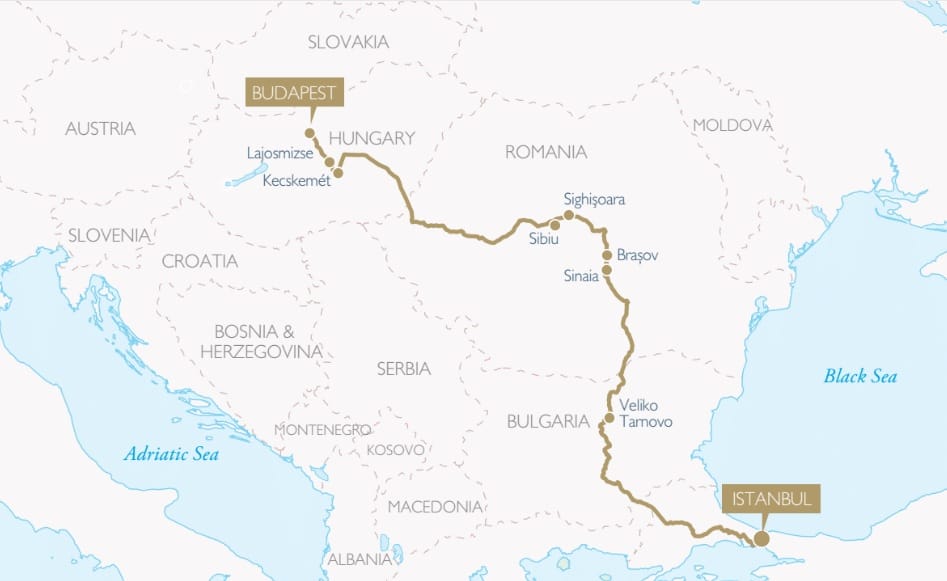 Arrive into Istanbul, where you will be met and transferred to the iconic five-star Four Seasons Sultanahmet hotel for a one-night stay. A century-old neoclassical home located in the tranquil sanctuary of the Old City and steps away from the historic Blue Mosque and Hagia Sophia, this boutique hotel offers a calming space filled with charm and sophistication.

This evening, we will enjoy a welcome reception dinner, giving you the opportunity to meet your fellow travelers.

Istanbul is the fabled city that spans Asia and Europe. Today, we will visit a selection of Istanbul’s must-see historic sites and see how old meets new and east meets west.

The Sultan Ahmet Mosque (the Blue Mosque), one of the most famous monuments in both the Turkish and Islamic worlds, is a superb creation in the classical Ottoman style and features six towering minarets and 260 windows illuminating its vast main chamber, which is decorated with more than 20,000 Iznik tiles.

Hagia Sophia, now a museum, was built in the 6th century by the Emperor Justinian and was one of the largest basilicas in the Christian world. After the Ottoman conquest, it was converted into a mosque and is today one of the most magnificent museums in the world. Take a moment to linger and admire the fine Byzantine architecture.

Next, visit Topkapi, the crown jewel of the Ottoman Empire, with its treasury and exotic buildings overlooking the Golden Horn. It is the largest and oldest palace in the world and was the primary residence of the Ottoman Sultans from 1465 to 1853.

Later this afternoon, board the Golden Eagle Danube Express, to begin your rail journey through Bulgaria and Romania to Budapest.

This morning, enjoy the views from our private train as we climb over the Shipka Pass and arrive at our first stop, Veliko Tarnovo, Bulgaria’s ancient capital. Nestled in a magnificent mountain setting, the stone houses seem perched one above the other on the steep banks of the Yantra River.

Your tour today includes the superbly preserved medieval Tsarevets Hill and Castle. There will also be free time to wander through the narrow alleyways of the ancient city.

This evening, relax in the Bar Lounge Car before dinner as our train continues through the scenic landscape and heads across the Romanian border.

Overnight, the train twists and turns as it climbs over the Carpathian Mountains and threads its way through a dramatic landscape dotted with clear mountain streams.

This morning, we arrive in Sinaia for a tour of Peleș Castle. The castle is a masterpiece of German new-Renaissance architecture, considered by many one of the most stunning castles in Europe. Commissioned by King Carol I in 1873 and completed in 1883, the castle served as the summer residence of the royal family until 1947. Its 160 rooms are adorned with the finest examples of European art, Murano crystal chandeliers, German stained-glass windows, and Cordoba leather-covered walls.

Returning to our private train for lunch, we continue onto Brasov in the afternoon for a visit to Bran Castle. Surrounded by an aura of mystery and legend and perched high atop a 200-foot-high rock, the 14th-century castle owes its fame to its imposing towers and turrets, as well as to the myth created around Bram Stoker’s Dracula. Following a tour of the castle and its surroundings, enjoy a gala dinner tonight inside the castle walls.

This morning, we make an early departure from Brasov and arrive after breakfast into Sighisoara for a walking tour of the town’s main highlights. A World Heritage Site rumored to be the birthplace of Dracula, it is one of the best-preserved fortified medieval towns in Europe. Burgher houses and ornate churches line its cobbled streets.

We return to the train for lunch as we continue onto Sibiu, known specifically for its Germanic architecture in the Old Town due to the legacy of 12th-century Saxon settlers. Today, the remains of medieval walls and towers can be seen around the city, including the 13th-century Council Tower, which connects the two main squares.

Tonight, we enjoy a final dinner on board our private train as we travel across the Great Hungarian Plain.

This morning, we get the opportunity to explore Kecskemét, a fascinating city at the geographical center of Hungary, before the train heads to Lajosmizse for a spectacular ‘Puszta’ horse show.

We then arrive late afternoon at the romantic and historic Hungarian capital, Budapest, located on the banks of the magnificent Danube, where we will enjoy a one-night stay in the five-star Four Seasons Gresham Palace hotel, a unique art nouveau landmark that combines historical elegance with ultra-modern comforts.

This evening, we will enjoy a farewell reception dinner at a local restaurant, giving you the opportunity to reflect on your journey through this fascinating part of Europe.

This morning, after an overnight stay at the Four Seasons Gresham Palace, we enjoy our final breakfast on the tour.

Your knowledge, experience, and intuition about what constitutes a trip of a lifetime was a hundred percent on target. Thank you again Eleanor Flagler Hardy for all that you've done for my experience and all you will do for others. You are a Gem.

Every year I think this will be my final trip. But the trips you offer are so glorious I can’t stop. You may have to have me committed somewhere to get me to stop.

Turkish visa required for US citizens.

A minimum of emergency medical and evacuation travel insurance is required for this journey.

Extend this journey by booking the Balkan Explorer journey beforehand — beginning in Venice and ending in Istanbul.

Castles of Transylvania: Istanbul to Budapest