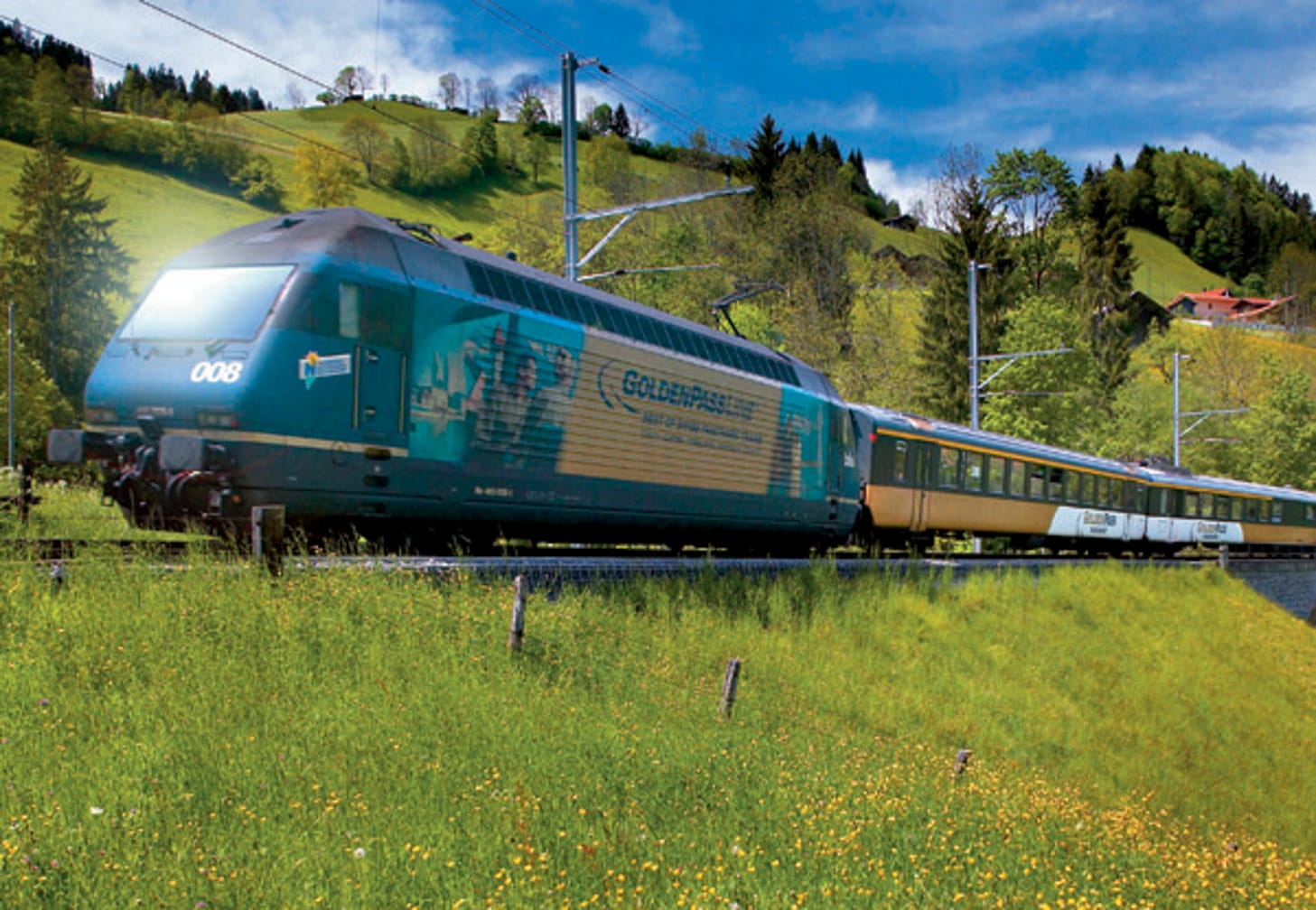 The 39-mile, meter-gauge Montreux–Oberland Bernois (MOB) is one of Switzerland’s oldest electric railways. It connects Montreux, on Lake Geneva, with the ski resort of Gstaad, ending in Zweisimmen.

The so-called “Golden Pass Route” continues on the standard-gauge Bern Lötschberg-Simplon railway to Spiez, and then on to Interlaken, over the Brünig Pass, to the shores of Lake Lucerne — a distance of almost 150 miles. It is one of the world’s most scenic railway journeys.

The famous Montreux-Zweisimmen portion of the MOB line was completed in 1905. In 1931, the MOB inaugurated its luxurious Golden Mountain Pullman Express—unfortunately on the eve of a world economic crisis. It stopped service the following year.

The MOB also offers romantic, luxurious rides on its GoldenPass Classic with their Belle Epoque coaches. These beautiful trains boast unique “wine cellar” coaches that serve an assortment of wines and regional specialties. GoldenPass Classic trains run daily in both directions along the Montreux to Zweisimmen route.

For the ultimate vacation, consider chartering the MOB’s two 1915-era coaches for yourself and your family or friends. Your party can enjoy an aperitif and light meal in a 36-seat first-class carriage and a 24-seat buffet car on the trip between Montreux and Zweisimmen. A stewardess is also available upon request.

All panoramic cars in both first and second class offer spectacular views from oversized windows as well as smaller, clerestory window in the ceiling. First-class cars have a central aisle with 33 seats and can accommodate groups of two and four. The Super Panoramic trains have 8 first-class VIP seats above the engineer for an additional fee. Second-class cars have 48 seats.

The Panorama cars in first and second class, as well as the “VIP” seats up front on the Superpanoramic Express, have access to a well-stocked “Rail Bar.”

The Golden Pass ‘Classic’ trains have an on-board wine cellar that serves an assortment of wines and regional specialties.

The MOB trains do not designate any of their equipment as “lounge cars.” However, should you continue from Zweisimmen to Interlaken on the standard-gauge BLS route (which you do on our Switzerland’s Classic Trains tour) you can enjoy the 27-seat, first-class “GoldenPass Lounge,” which boasts comfy leather sofas and chairs. Or you can relax in the Salon Bleu car, whose 36 seats pivot to afford the best views.

This independent journey includes the Glacier Express and Bernina Express, as well as the Centovalli Railway and Golden Pass line—four of Switzerland’s most scenic routes possible by train.

Splurge on the VIP seats on this train for a unique engineer’s view not offered on many trains.

What To Do During Pandemic? Be Wise: Revitalize, Improvise

Talk to an expert about journeys on this train.