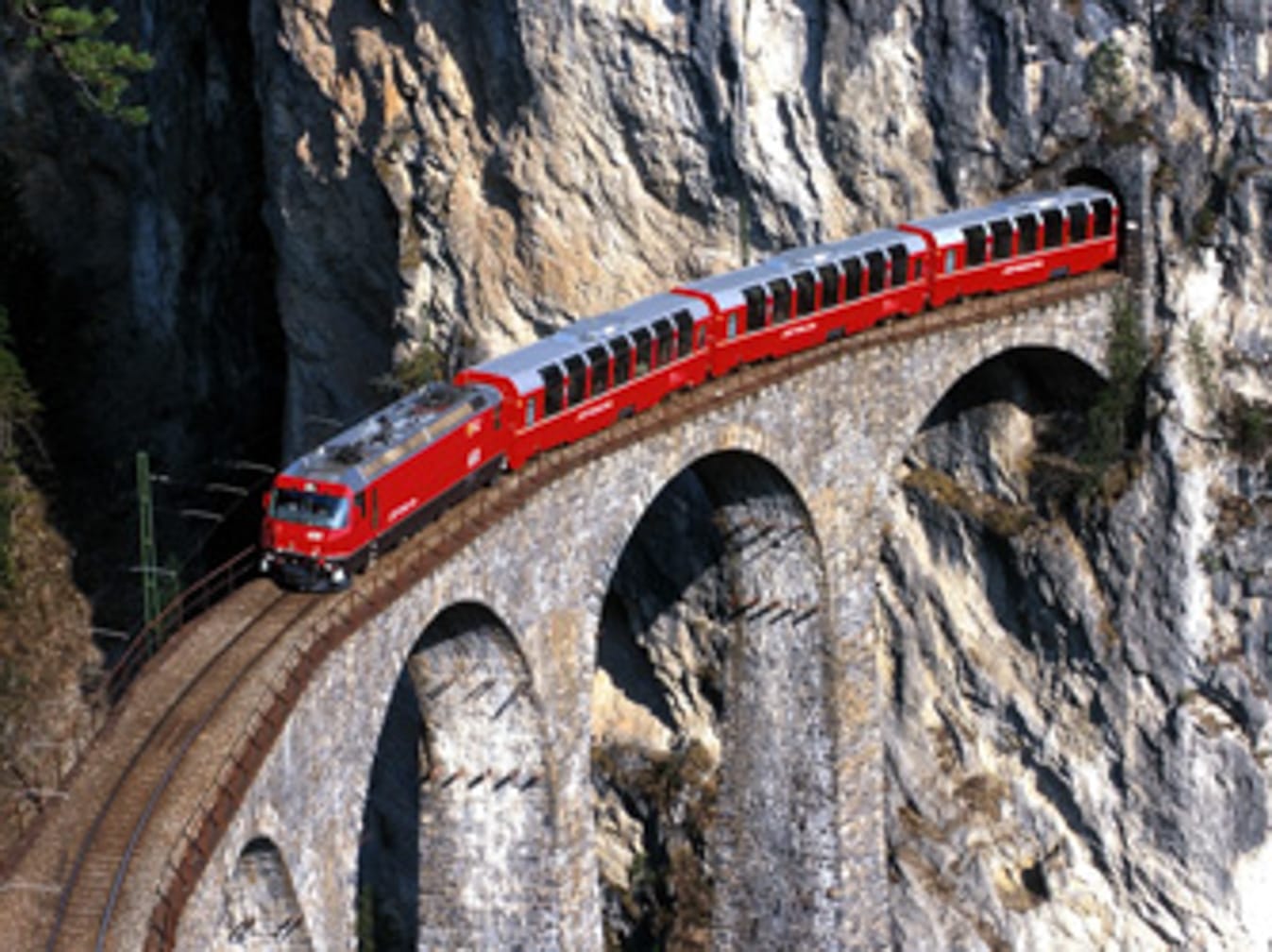 The spectacular Bernina line was completed in 1910 and is run by Rhaetian Railways. Beginning in Chur, St. Moritz or Davos, it passes the glaciers of Piz Bernina, making this the highest railway crossing in all of the Alps. It travels over 38 miles, climbing grades of up to 7%––without rack and pinion––to more than 7,391 feet at the Bernina Pass summit, and drops down to just 1,408 feet at Tirano, Italy. One minute, it seems, you’re above the tree line in a frozen wasteland; the next, you’re zooming to a landing, like in an airplane, into a subtropical Italian paradise.

The combination of remarkable scenery and engineering prompted the World Heritage Committee on July 7, 2008 to add this line (and its sister line, Albula) to the UNESCO World Heritage list. This makes the Rhaetian Railway one of four railways worldwide to be considered “universally outstanding” by UNESCO. (The other three are the “toy trains” of India: Darjeeling, Shimla and Nilgiri.)

Bernina Express trains have spacious first- and second-class Panorama cars. All seats require reservations. You won’t be sitting long, however. The train passes over viaducts as high as 295 feet, twists through the Albula Valley, up past rock formations and glaciers, then plunges into Italy on a famous corkscrew viaduct.

This is a daytime-only train; there are no overnight accommodations on board.

A roving snack trolley has tea, coffee, snacks, and souvenirs for sale. Or, bring a picnic — or plan to eat lunch in a neat café once you get to Tirano.

This independent journey includes the Glacier Express and Bernina Express, as well as the Centovalli Railway and Golden Pass line—four of Switzerland’s most scenic routes possible by train.

Experience the unparalleled beauty of Switzerland’s mountainous landscapes in luxury and style on the Swiss Rail Spectacular. Daylight travel on the country’s most exquisite and historic trains during this 13-day tour (with a three-day pretour rail extension from London).

If you really want an adventure, sit in the driver’s seat. The cost is about $750 per person. Although you do not actually drive the train, you do sit with the driver as you cross the highest crossing of the Alps. Price includes two first-class RHB tickets (Chur-St. Mortiz or St. Moritz-Tirano or return); a detailed printed plan of the trip with the explanation of the signals, a certificate, and a personal photograph.

The train now offers free Wi-Fi during your journey (registration is required).

What To Do During Pandemic? Be Wise: Revitalize, Improvise

Talk to an expert about journeys on this train.